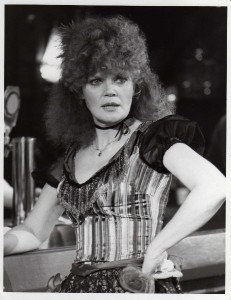 Eileen Brennan (September 3, 1932 – July 28, 2013) was an American actress of film, television, and theater. Brennan is best known for her role as Doreen Lewis in Private Benjamin, for which she received an Oscar nomination for Best Supporting Actress. She reprised the role for the TV adaptation, winning both a Golden Globe and Emmy for her performance. She received Emmy nominations for her guest starring roles on Newhart, Thirtysomething, Taxi and Will & Grace.

Brennan also worked with director Robert Moore and writer Neil Simon, appearing in Murder by Death as Tess Skeffington (1976); and The Cheap Detective (1978). Both of these movies also starred James Coco, James Cromwell and Peter Falk. She had a starring role, playing ‘Mutha’ in the 1978 movie, FM, about rock radio.

In 1980, Brennan received a best supporting actress Oscar nomination for her role as Goldie Hawn’s nasty commanding officer in Private Benjamin. She reprised the role in the television adaptation (1981–1983), for which she won an Emmy (supporting actress) as well as a Golden Globe (lead actress). She has one additional Golden Globe nomination and six Emmy nominations.

Brennan received an Emmy nomination for her guest starring role in Taxi episode “Thy Boss’s Wife” (1981). Brennan guest starred on two Murder, She Wrote episodes, “Old Habits Die Hard” (1987) and “Dear Deadly” (1994), and in 1987 she also appeared in the Magnum, P.I. episode, “The Love That Lies”.