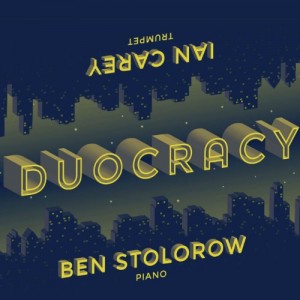 Inventive and pretty, the music on Duocracy (recorded in 2013) is reminiscent of that created by Ruby Braff and Dick Hyman on several albums, including Play Nice Tunes (1994), though Braff usually performed on cornet while Ian Carey plays trumpet.  Pianist Ben Stolorow and Carey mostly favor tunes from what is often called the Great American Songbook, ones similar to those Braff and Hyman played occasionally.  Jazz writers who decry musicians’ continued interest in such music should listen to Stolorow and Carey’s fresh treatment of standards.

Ranging chronologically from the Gershwins’ “How Long Has This Been Going On” and Rodgers and Hart’s “You Took Advantage of Me” (both 1928) to Henry Mancini’s “Two for the Road” (1967), seven of the ten selections are well known.  The tempos range from sprightly to deliberate.  The briskest selection, “Cherokee” begins with a brief fanfare, as if to announce that something special is coming. Indeed, the trumpet-piano interplay is impressive, as it is throughout this CD.  The contrast between “Cherokee” and the next tune, Gordon Jenkins’s “Goodbye,” the longest and least hurried piece, is extreme; pairing these pieces reveals the musicians’ emotional range, from playfulness to introspection.  In tempo and sensitivity, the remaining selections lie between these two performances.

The interpretation of one standard tune is particularly noteworthy.  Stolorow and Carey capture the beauty of Jerome Kern’s “All the Things You Are” while approaching it obliquely.  Instead of stating the melody, improvising, and restating the theme, they improvise until introducing the melody in the last few bars.  As Dave Brubeck and Paul Desmond engage in polyphony on their 1953 recording of Kern’s composition, so do Stolorow and Carey briefly on theirs sixty years later.

In addition to standards, the duo performs tunes by two jazz composers and one original piece.  Thelonious Monk’s jaunty, idiosyncratic “Four in One” is less well known than such Monk compositions as “Blue Monk,” “Rhythm-a-ning,” “Round Midnight,” “Straight, No Chaser,” and “Well You Needn’t,” which have been recorded numerous times.  To their credit, the musicians retain the tune’s quirkiness and do not smooth its angularity in order possibly to make it more palatable to the general listener. The presence on this CD of “Social Call,” played lyrically, serves as a reminder that the sadly neglected Gigi Gryce wrote some first-rate tunes, including “Blue Lights,” “Hymn to the Orient,” “Minority,” “Nica’s Tempo,” “Reminiscing,” and “Wildwood.”  To me, Stolorow and Carey’s “Comin’ Along” is the least satisfactory selection, not because the musicians don’t play well, but rather because the composition is not particularly tuneful.  The performance of this piece based on the chords of Benny Golson’s “Along Came Betty” alludes to both “All the Things You Are” and “Four in One.”

Hardly radical, the trumpeter and pianist are content to investigate the nuances of, mostly, established compositions, ones that some commentators consider effete.  These tunes have endured because of their attractiveness and richness, qualities that appeal to instrumentalists and singers. Stolorow and Carey’s treatment of them is uniquely theirs. They play nice tunes nicely.