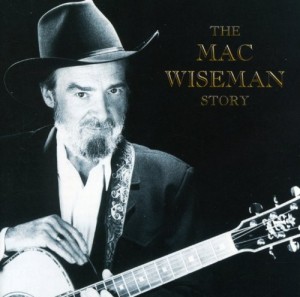 Grab a coffee, sit back, and enjoy as Music Charts Magazine’s Big Al Weekley sit’s down with the one and only “Mac Wiseman”.

Wiseman told CBS, “I anticipated and hoped for it a long time. This is the biggest thing that’s ever happened to me in my 70-odd years. Being in the same categories with all the greats over the years, I’m just really flattered.”

In 1993 Mac Wiseman was inducted into the International Bluegrass Music Hall of Honor.

Malcolm B. Wiseman (born May 23, 1925), better known as Mac Wiseman, is an American bluegrass singer, nicknamed The Voice with a Heart. The bearded singer is one of the cult figures of bluegrass.

Born in Crimora, Virginia, he studied at the Shenandoah Conservatory in Dayton, Virginia—before it moved to Winchester, Virginia in 1960—and started his career as a disc jockey at WSVA-AM in Harrisonburg, Virginia.

His musical career began as upright bass player in the band of country singer Molly O’Day. When Lester Flatt and Earl Scruggs left Bill Monroe’s band, Wiseman became the guitarist for their new band, the Foggy Mountain Boys. Later he played with Bill Monroe’s Bluegrass Boys. After a performance on Louisiana Hayride he became popular as solo artist. In the 1950s, he was the star of The Old Dominion Barn Dance on WRVA in Richmond, Va.

During the folk revival in the 1960s, Wiseman had successful concerts at the Hollywood Bowl and Carnegie Hall.

He joined producers Randall Franks and Alan Autry for the In the Heat of the Night cast CD Christmas Time’s A Comin’ released on Sonlite and MGM/UA for one of the most popular Christmas releases of 1991 and 1992 with Southern retailers.

In 1993 he was inducted into the International Bluegrass Music Hall of Honor. His substantial girth and light tenor voice gave rise to the quip that “Mac Wiseman sings like Gene Vincent looks, and looks like Ernest Tubb sings.

In 2014 he was the inducted into the Country Music Hall of Fame. In the same year, he also released a new album of songs inspired by his mother’s handwritten notebooks of songs she heard on the radio when Mac was a child: Songs From My Mother’s Hand.