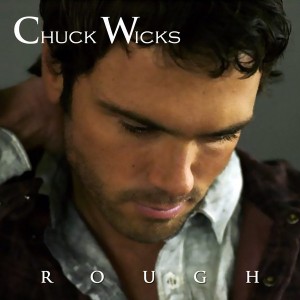 Things have not been easy for Chuck Wicks. The artist quickly rose to instant stardom with the release of his debut single, “Stealing Cinderella”, back in 2007. The song peaked at No. 5 on country charts, and the album it was from, “Starting Now”, rose to No. 7 on the Billboard Country chart back in 2008.
Since that fast start back in 2007, Chuck has found only moderate success with the release of singles “All I Ever Wanted,” in 2008, and “Man of the House,” in 2009. He achieved even less success with and “Hold that Thought” and “Old School,” in 2010. All of those singles were from the only studio album he recorded.
Chuck Wicks has recently released his second album. This one is actually an EP (extended play). An EP is a musical recording that contains more than just one single, but it is really too short to qualify as a full studio album. Chuck’s new EP contains just five songs, and is titled “Rough”. When you listen to the songs, they don’t sound like the artist has been going through rough times. Every song sounds like it was written by someone who is very happy with the way things are going in his life. Chuck had a hand in co-writing all of the songs on the new EP. “The music has been a long time coming,” Chuck said. “I believe this EP reflects the steps I’ve taken to grow, not only as an artist but as a writer as well. And now I couldn’t be more excited about the release of this new music, and I hope people enjoy it as much as I do,” he said.
“Salt Life” has a guy on a boat, watching the sunset, putting footprints in the sand, and dropping an anchor for a fun afternoon at sea. “Saturday Afternoon,” says it ‘feels like the whole world shining down me’. It has a nice rhythm and acoustic guitar, and is a fun song.
“Always” was my favorite on this five-track EP. This one is a powerful ballad, with a strong piano influence, and memorable lyrics. More than any of the others, this song definitely lets you hear how strong Chuck’s vocals are.
The five songs you will find on this EP are “Fix Me,” “Whole Damn Thing,”  “Saturday Afternoon,” “Always,” and “Salt Life”. Every one of the songs will remind fans why they like Chuck Wicks, and will probably make them wonder why it has been so long since his last album was released.
Even though he has not been recording, or putting new songs out on the radio, the artist has been keeping busy. In addition to songwriting, he has shows scheduled in Nashville, as well as other parts of the country.
Fans can keep up with Chuck Wicks by visiting his web site, www.chuckwicks.com, and following the artist on Twitter @chuckwicksmusic. He keeps fans up-to-date with posts on facebook at www.facebook.com/chuckwicks. There you can find photos he has added, as well as tour information.
Music Charts Magazine Country Music Album Reviews in cooperation with Country’s Chatter “Your Country Music News Source” – CountrysChatter.com