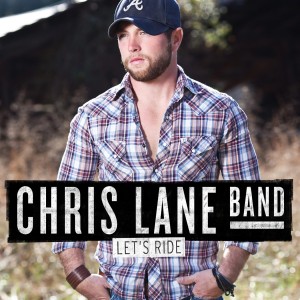 It's not often that I get to review an album and introduce you to a new artist in the same article. But, I have that opportunity with the Chris Lane Band. This group has been around for a little while, putting their first full-length album out in the spring of 2012. They haven't done much on radio, and most people still consider this a new group.
It is also not often that a new artist has a chance to bring his band to a venue where 65,000 people are in attendance to watch him open for a group like Florida Georgia Line. Chris Lane and his band got to do that on Thursday night, Aug. 22, at the Appalachian Fair in Gray, Tenn. Everyone knows Florida Georgia Line, everyone pretty much knew what to expect from them, and from their music. The surprise that night came from The Chris Lane Band. They not only opened the show for Florida Georgia Line, they did it effortlessly.
Chris Lane's voice was meant to do country music. And, he had a hand in writing eight of the songs on the band's debut full-length album. He is also a talented musician. All that, added to his very polished stage presence, and fan-friendly personality, puts Chris right where he needs to be to make it in the very crowded country music arena. And we have to mention, as one of his young fans was quick to point out to me, 'he's pretty easy on the eyes, too'.
The group has a second full-length CD in the works, but fortunately for country music fans, the first one is still available. The album is called "Let's Ride," and about 99.9 percent of this album is just what today's country music fans are looking for. The one-tenth of one percent that may not be is his rap version of the title track, "Let's Ride". He has that song on the album twice, once with the rap, once without. I obviously like the one without better. With the way rap music has been finding its way into mainstream country, I understand why Chris chose to do that to one of his songs. And, while there are fans out there who will like it, I probably never will.
I do need to tell you about everything else you are going to hear on this CD. Chris is giving us a nice mix of country, country/ pop, and country rock. His ballads are romantic,  his country is fun, upbeat, feel good, his country/pop is as unquestionably right up there with anything you get on today's radio (from artists like Lady Antebellum, Gloriana or Carrie Underwood). His song, "Alone," features Chelsea Sorrell, and when I first heard this song I wondered why it hasn't already found its way to country radio. If I were a program director at any top 40 country station, I wouldn't hesitate getting "Too Tennessee" on the playlist. And keep in mind, these are all songs from the first album, we have another one that will be released, hopefully, very soon.
A lot of the music we hear on country radio seems to be geared to younger listeners. Chris Lane hasn't forgotten the older country music fans. His music speaks to all of us. I don't think we will ever get country back the way it was from 1950-1980, but Chris Lane Band is doing their part to bring us back to a little of what we remember about country music. He's making it modern, while at the same time keeping it country.
The 14 tracks on the "Let's Ride" Deluxe Edition are "I Go Back," "All I Ever Needed," "Let's Ride," "Starting Tonight," "More Than That," "Harder Thank it Should Be," "Just Like You," "Carolina Kiss," "Alone" (featuring Chelsea Sorrell), "Too Tennessee, "Chasin' the Sun Down," "Let's Ride (rap version), "All I Ever Needed (acoustic) and "Georgia" (Bonus Track). This album is still available on iTunes, and you can listen to some of the songs on the Chris Lane Band web site.
Learn more about Chris and the band at www.chrislaneband.com. Visit his facebook page, and follow him on Twitter @chrislaneband. Be sure to go to www.countryschatter.com for more reviews of albums and shows, and for all the latest country music news. Follow us on Twitter, too, @countryschatter.
Music Charts Magazine Album Reviews - in partnership with CountrysChatter.com - Your #1 Country Music Source -