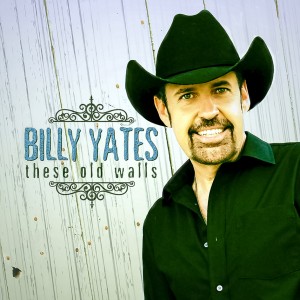 Billy is an American country music artist. He was born March 13, 1963 in Doniphan, Missouri. Billy has released eight studio albums and has charted four singles on the Billboard country charts, including the number 36 “Flowers” in 1997. Yates also co-wrote George Jones’ singles “I Don’t Need Your Rockin’ Chair” and “Choices”.

Country artist Billy Yates rolled the dice in 2001 when he walked away from Columbia Records Nashville to form his own company, M.O.D. (My Own Damn) Record Label. At the time it was unheard of in Music City for an artist to make such a move. Yates’ decision to go independent was brazen considering the fact the singer/songwriter had yet to build much of a fan base while signed to a major label. During a meeting with (then) Columbia Nashville label chief Allen Butler, Yates voiced his desire to make an old-school country album free from the restrictions of a major corporation. Once it was clear that Yates wasn’t leaving to join a competitor’s roster, Butler released the singer from his contract. The very next day, Yates began work on what would become his first indie release, the critically acclaimed If I Could Go Back (2001).

Born into a musical family, Yates got his start singing alongside his father  and mother (Sunday mornings before church) on a local radio program. The future country star grew up on a farm, where the family “lived off the land” and raised its own “beef, pork and poultry.” A steady diet of hardcore country music — artists like Jim Reeves, Ernest Tubb, Buck Owens, and Merle Haggard — helped form the musical foundation on which Yates would later build his career. At one point too shy to perform in public, Yates eventually summoned the courage to approach the owner of the Lake Wappapello Opry in Wappapello, MO. An impromptu performance of Ricky Skaggs’ “Cryin’ My Heart Out Over You” won the young performer a spot on the weekly show. After three years (during which time he began making regular trips to Nashville), Yates landed a theater gig in West Plains, MO.

After a brief stint in college, Yates attended barber school. Once he received his barber’s license, the singer returned home, where for five years he cut hair in the day, played music on the weekends, and worked at a local radio station in the evenings. In 1987 Yates made the move to Nashville and later signed a publishing deal with Hori Pro Entertainment. The wordsmith’s first cuts as a songwriter came when legendary country artist George Jones recorded two Yates compositions for his 1992 album Walls Can Fall, including “I Don’t Need Your Rockin’ Chair,” the 1993 Country Music Association’s Vocal Event of the Year. Jones would later take the Yates-penned “Choices” into the Top 30 on the country charts. The song earned Yates and co-writer Mike Curtis a Grammy nomination. More cuts came for Yates while he pursued his own record deal. Almo Sounds released the singer’s self-titled debut in 1997. The album’s first single, the riveting “Flowers,” cemented Yates’ reputation as a traditionalist. Sadly, Almo Sounds folded before the singer could establish himself in the country music community. Yates would eventually sign with Columbia Records Nashville. After a few false starts, and after years on the major-label treadmill, Yates made the decision to leave Columbia and form his own record label. The singer/songwriter produced nine critically lauded studio albums and one hits package (Favorites) between 2001-2013, including masterstroke collections Harmony Man (2005),That’s Why I Run (2008), along with his current 2015 release, These Old Walls. While success as a performer has all but eluded him in the United States, Yates has built a large and loyal following in Europe, where he enjoys hit singles and sold-out tours. Yates’ songs have been recorded by various artists, including Gary Allan, Tracy Lawrence, George Strait, Sara Evans, and Kenny Chesney. ~ Todd Sterling, Rovi

To book a show, buy a CD, or to just learn more about Billy Yates – Please visit his website: