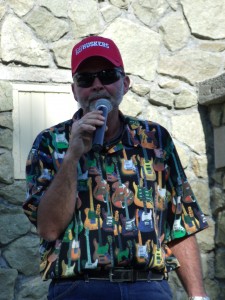 Big Al was nominated by Curt Shoemaker of Iona, Kansas.

Shoemaker is a three time hall of famer, professional steel guitarist, songwriter-entertainer and recording artist. Weekley accompanied Shoemaker back in 2009 in recording Gospel CD “Gathered In His Name,” with the song “Peace in the Valley.”

Big Al was born in Ravenswood, West Virginia. He picked up his first guitar at age 14 and never looked back. He began playing with various Bluegrass and Country Stars. He has performed Country and Bluegrass acts all across his home state. In 1987, he was approached following a show at Ohio University and was asked if he would be interested in hosting a show on public radio. This was the first break in a career for Weekley and he is now one of the  most recognizable Country and Bluegrass radio personalities in the country.

After four years on public radio at Ohio University, driving truck and being the music director for 1360 WMOV AM in Ravenswood, West Virginia, Weekley thought it would be good to expand and moved west. He lived in Colorado for a short time playing with Bluegrass bands. After traveling with a band to Crete, Nebraska, he decided he wanted to be part of the Nebraska music scene because it felt like home, so in 1996 he moved to Nebraska. While playing in Nebraska and surrounding states he taped his syndicated radio show for stations back east and then it was time to hit the airwaves in Nebraska. In 1999 he became  part of history with 50,000 watt KRVN Radio Station in Lexington. His Bluegrass and Country shows have been aired on KRVN 880 AM for the last 14 years.

Just a few of Weekley’s accomplishments include being chosen to join Music Professionals in Nashville; he has toured with the number one Christmas group in America, ‘The Mannheim Steamrollers’ from Omaha; 1999 and 2000 Big Al worked with the Nebraska State Fair Board to produce two Bluegrass and Gospel music festivals in Lincoln; in 2000 he founded the Country/Bluegrass Show in North Platte, along with Don and Donna Menzter, which is still going on after 13 years.

In 2003 Big Al was nominated for ‘DJ of the Year’ by the International Bluegrass Music Association in Nashville. He finished in the top three along with Eddie Stubbs from the Grand Ole Opry and Terry Herd from Satellite Radio in the U.S. and Canada. He is the only Nebraska DJ to ever be nominated.

In 2003 he recorded and produced the album ‘In It For The Long Haul.’

From 2004 to 2006 he has driven truck, worked in radio and hosted music shows around Nebraska and surrounding states. He has received the Hometown Hero Award from KNOP TV and presented the 2006 Nebraska Veteran of Foreign Wars Memorial Highway 83 Award.

In 2011 he was contacted and told his song he co-wrote with friend Cliff Abbott “Lines On The Highway” would be recorded and released by Bluegrass Legend Larry Sparks. It was release in April on Larry’s Album called “Almost Home” recorded by Rounder Records.

In recent years he has also been a judge at many music contests including the Colgate Country Music Showdown  and the Galaxy of Stars at the Nebraska State Fair.

Twenty-six years after his start in the music world, Big Al makes a living driving truck for Landmark Implement, broadcasting to his loyal fans on KRVN, he is the owner of a newspaper in Bertrand, Nebraska, he is the chief branding officer for Music Charts Magazine in Nashville and travels throughout Nebraska performing shows at county fairs, benefits and festivals.

Recently he received a special award for his efforts during the 2013 Miles of Memories Country Music Festival September 5-7 in Hastings, Nebraska. Weekley was given the honor during the final set of MusicFest.

MusicFest producers say Weekley’s “Unending devotion and dedication to the preservation of old-time country music” is what made him the choice for the honor. MusicFest hosts Tex and Mary Schutz told a story during the presentation about Big Al’s arrival in Nebraska in the early 90’s when he didn’t even have a guitar. The couple was able to present him with one during their Prairieland CountryFest.

www.TheBigAlBluegrassShow.com (as heard from Big Al’s home base at KRVN in Lexington, NE and also broadcast on WOTR FM) – www.KRVN.com and www.WOTRFM.com

www.KRVN.com – Listen Live to Big Al Weekley’s Americana/Gospel Show on KRVN 880 AM Rural Radio Sunday mornings from 06:00 to 10:00 AM CST