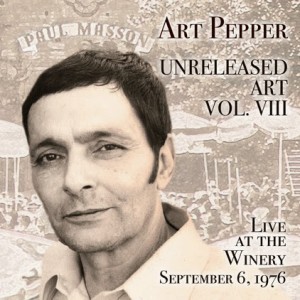 Johnny Hodges, Benny Carter, Charlie Parker, Ornette Coleman—these and perhaps one or two others rank as the major jazz alto saxophonists. If they receive the grade of A, Art Pepper probably deserves A-.  Inventive, impassioned, and technically adroit, he played in an appealing individual style. Over almost four decades (from 1943 until 1982, the year he died), he recorded mostly at a high level, though he was off the scene in the mid 1950s and for most of the first half of the 1960s while incarcerated for heroin addiction, twice in San Quentin.  He rehabbed at Synanon.

Though Pepper was not underrecorded, his widow, Laurie Pepper, has issued a series of his previously unreleased performances on Widow’s Taste, most recently Live at the Winery.  I cannot think of a Pepper album that better demonstrates his skills.  It has flagwavers and sensitive ballads, as well as a blues, all performed by a musician playing at his best, which is something of a miracle, given his troubles along the way. Recorded in 1976 in Saratoga, CA, these performances are emotional, even highly so on one selection.

On the middle-groove, gritty “Saratoga Blues,” Pepper demonstrates his facility with the twelve-bar format.  At the end, he is especially effective when hinting at Charlie Parker’s “Parker’s Mood” but not actually quoting from it.  Some people applaud the tendency of soloists (Dexter Gordon, for example, and Parker himself) to quote from other tunes; I find it lazy, an unsatisfactory substitute for invention: Can’t think of anything original?  Then quote from another tune.

There are three swingers.  “Caravan” and “What Laurie Likes” are intense.  Evidencing the influence of John Coltrane, Pepper plays a long introduction before getting to the melody of the former.  The group plays the latter, melodically similar to Bobbie Gentry’s “Ode to Billie Joe,” in a funk groove, with a bow to Roland Kirk toward the conclusion. Yet “Straight Life,” one of Pepper’s signature tunes and the title of his autobiography (written with Laurie Pepper), is the performance that will most attract listeners who like music performed way up-tempo.  This reworking of “After You’ve Gone” is played so fast that one marvels at bassist Jim Nichols’s ability to keep the beat and at Pepper’s to create.

Though not precisely a ballad, “Ophelia” is far more subdued than the swingers.  Pepper states that he wrote it in order to capture various aspects of women, including their madness and beauty (an obvious reference to Ophelia in Hamlet). I cannot determine the degree to which he succeeds.  It is, in any event, an attractive composition and performance.  “Here’s That Rainy Day” is not only a ballad, but it approaches Frank Sinatra’s 1959 version as the most poignant recording of this song. Pepper’s interpretation ranks, in my judgment, with Miles Davis’s “It Never Entered My Mind” (1956) as among most supernal modern jazz ballad performances.  Pepper was so moved by pianist Smith Dobson’s solo that he almost chokes up when talking about it after the music stops.  He goes so far as to say that Dobson’s solo could serve as a definition of jazz: “That’s what they’re talking about when they say ‘jazz.’”  While Dobson’s solo is beautiful, Pepper’s impassioned playing is even more impressive.  Some soloists, such as Lester Young, insist on knowing the lyrics to tunes they play so they can faithfully render the emotions the words express.  On “Here’s That Rainy Day,” Pepper conveys the sadness and introspection—even the agony--of someone suffering from lost love.

Live at the Winery is spectacular in every way, so much so that it might be Pepper’s most rewarding album.