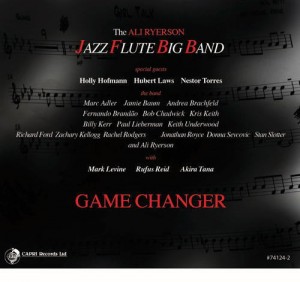 For at least six decades, some jazz recordings have featured multiple instruments of the same family.  Beginning in the mid 1950s, for example, a vocal group released albums titled The Four Freshmen and Five Trombones, The Four Freshmen and Five Trumpets, The Four Freshmen and Five Saxes, and The Four Freshmen and Five Guitars.  In 1956, Columbia released J. J. Johnson and Kai Winding’s Jay & Kai +6, with eight trombonists.  The next year, Art Blakey recorded an album (Orgy in Rhythm) featuring nine percussionists. A few years later, Warner Brothers issued LPs by groups known as Guitars, Inc; Saxes, Inc.; and Trombones, Inc.  The first includes five guitarists; the second, thirteen saxophonists; the third, twenty trombonists, though only ten play at a time. Beginning in 1977, Odean Pope released several albums by his saxophone choir, usually consisting of nine saxophonists.  At a session presumably led by Jane Bunnett, the Havana Flute Summit recorded an album with four flautists (1996). This number of flutes is modest when compared with the nineteen on Ali Ryerson’s Game Changer (2012), possibly the most recent recording featuring many musicians playing the same kind of instrument, or variations of it.

Ryerson had to confront the issue of how best to attain tonal diversity in music played by a band of flutes.  She did so by employing several types of the instrument: C, alto, bass, and contrabass.  One musician doubles on piccolo.  She engaged six arrangers who helped provide variety by writing engaging voicings and occasionally dividing the flutes into two sections, with one playing the melody while the other supports it, as frequently happens between reeds and brass in a typical big band.  Ryerson and the arrangers added texture by allotting solo space to members of the rhythm section--pianist Mark Levine, bassist Rufus Reid, and drummer Akira Tana. These tactics help—and the multitude of flautists adds body--but the overall sound remains, understandably, thin. It seems less so when the band backs a soloist, primarily because the large group is then of secondary interest. Sometimes, it rests during a solo.

Despite this issue, Ryerson’s CD has much to recommend it, including the hip tunes it plays.  Aside from Gabriel Fauré’s 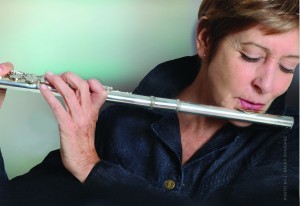 While hip tunes appeal, what matters is how they are interpreted and performed.  Because the band plays what the arrangers wrote, they are the major interpreters, and their creations are uniformly attractive.  Ryerson employed six of them: Billy Kerr (who also performs on flute), Mark Levine, and Steve Rudolph, who were responsible for one tune each, plus Michael Abene (two tunes), Bill Cunliffe (two), and Mike Wofford (three). Consider “Ana Maria.”  On Shorter’s original recording, the soprano saxophonist is the only soloist, and mostly he plays the melody.  Wofford’s lush arrangement emphasizes the tune’s chords and inherent loveliness while allowing for solos by bassist Reid and, on alto flute, Marc Adler. Wofford’s interpretation is every bit as valid as the composer’s version and is, if anything, more pleasing, at least to me. Or consider “Con Alma,” for which Cunliffe provides a new introduction (new to me, anyway). About half-way into the piece, following Nestor Torres’s solo on C flute, the performance all but stops, then resumes with original Cunliffe material played in a more sprightly manner than the first part. Following a brief solo by drummer Tana, the music again halts before returning to Gillespie’s melody. That is, Cunliffe offers an idiosyncratic version of “Con Alma” that keeps the listener expecting the unexpected.  In other words, these and the other arrangements are inventive and well suited for the group that plays them. And the musicians perform the arrangements as directed: they never falter; they are professionals.  Plus, the three guest flute soloists—Holly Hofmann (C flute), Hubert Laws (alto), and Torres (C), each of whom solos once—are good improvisers. At least I assume they improvise, as opposed to playing written solos.

Because of Ryerson’s musical vision for this band of odd instrumentation, because of the excellent arrangements of attractive tunes, because of the musicians’ ability to perform well, and because of the nature of the solos, I recommend this CD.  Ultimately, the unavoidable thin sound—which is ameliorated somewhat by strategic planning--matters little.