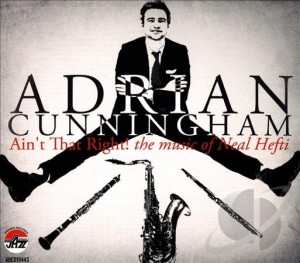 Title = “Ain’t That Right!” The Music of Neal Hefti

Trumpeter Neal Hefti played in bands led by Benny Carter, Woody Herman, Harry James, and others, and recorded with the likes of Billie Holiday and Lucky Thompson. In time he led his own band. Yet he is most important as a composer and arranger. He made his mark on popular culture by creating the theme for the television series Batman and producing scores for such movies as Barefoot in the Park and The Odd Couple. His writing contributed significantly to the smaller world of jazz. He wrote for many groups and arranged for jazz-oriented singers, including Peggy Lee, Frank Sinatra, and Mel Tormé. He arranged the music for the masterful Clifford Brown with Strings. His major contribution to jazz resulted from composing and arranging for the Count Basie band in the 1950s. The tunes immediately entered and forever remained in Basie’s book. Partly because of his arrangements of them, the focus of the band changed. Previously, it had used arrangements primarily to set up solos by such musicians as Buck Clayton and Lester Young. In the 1950s, the arrangements of Hefti and others required the band to focus more on the arrangements themselves than on solos, though the band included solid soloists, including Eddie “Lockjaw” Davis, who is especially forceful on Basie (also known as The Atomic Basie), the initial Basie album of Hefti’s compositions and arrangements.

Australian Adrian Cunningham performs only Hefti’s music on his newest release, and such a tribute is welcome. Though he plays some of the composer’s most familiar tunes, many are not well known. Among the latter, surprises abound. “It’s Awfully Nice to Be with You” is a pretty melody that Cunningham interprets slowly on clarinet and that features pianist Dan Nimmer. “Ain’t That Right” and “I’ve Got Love” are in a gospel vein. Of these less familiar tunes, I find most rewarding “Zankie,” a blues Hefti wrote for the movie Synanon. Cunningham (again on clarinet) takes it at an attractive deliberate tempo.

In the notes to this release, Will Friedwald comments about Cunningham’s probable rationale for omitting some Hefti tunes. He writes: “Some works are not included for the apparent reason that they’ve already been played so definitively that no one wants to come up with something that would, in all likelihood, be compared unfavorably to the iconic recordings.” He identifies “Splanky” as a composition possibly rejected for this reason. His statement implies that the tunes Cunningham performs have not been recorded definitively. Though people can disagree about what constitutes a definitive recording, at least two of the tunes Cunningham chose to release strike me as not having been surpassed since Basie recorded them in the 1950s: “Li’l Darlin’” from Basie and “Cute” from the follow-up album, Basie Plays Hefti. If one believes that Basie’s recordings of these compositions are iconic (perhaps Friedwald does not so consider them), then, according to Friedwald, later versions—such as Cunningham’s—might reasonably be compared with them.

The original “Li’l Darlin’” is probably one of the slowest big band recordings: it creeps along, with the beat sustained primarily by the light, almost unnoticeable guitar strumming of Freddie Green and bass plucking of Eddie Jones. Cunningham’s tempo is a little faster than Basie’s, but the beat on Cunningham’s is heavy, not subtle. Further, Cunningham (here, on tenor saxophone) is joined by trombonist Wycliffe Gordon. The two men do as well as could be expected in creating harmonies reminiscent of those Basie produced with an entire band. However, Gordon’s gutbucket playing during his interjections seems inappropriate on a tune of such delicacy. Within the context of Friedwald’s comment, Cunningham should not have released this recording of “Li’l Darlin’,” unless he did not mind having it compared with Basie’s version.

Basie first recorded “Cute” as a feature for flautist Frank Wess and drummer Sonny Payne, on brushes. This skittish performance is all surface, precisely as suggested by the nature of the composition and implied by the title. There are several differences between Basie’s and Cunningham’s treatments of it. Cunningham’s tempo is slower than Basie’s. Though Cunningham is an able flautist, here he plays tenor saxophone; drummer Chuck Redd uses sticks, not brushes. After the melodic statement, Cunningham’s recording turns into a typical jazz performance, with solos by the leader and the pianist before Cunningham and Redd interact toward the end. This selection concludes without restating the theme. That is, Basie honors the composition while Cunningham uses it as a means of getting to blowing. Cunningham’s version is valid—using a composition as a taking-off point for improvisation—but it is exceptional only in the sense that it is different from any other interpretation of “Cute” of which I am aware.

Despite Cunningham’s and Basie’s different approaches to some of the tunes presented on this release, the playing of Cunningham and his sidemen is engaging. Perhaps this CD of Hefti tunes will help this able, inventive instrumentalist become better known than he is outside Australia, as he deserves to be.