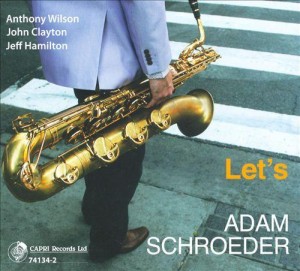 Relatively new to the scene though clearly accomplished, baritone saxophonist Adam Schroeder plays tunes he wrote and relatively obscure compositions by others. This variety is evident on Let’s, his second CD, where he is accompanied by guitarist Anthony Wilson, bassist John Clayton, and drummer Jeff Hamilton.

A Schroeder original, “The Smulyan Spectacles” refers to baritone saxophonist Gary Smulyan. Listeners familiar with his recordings will largely know what to expect from Schroeder: attractive ballads and swingers in the bebop tradition. Two compositions illustrate the scope of Schroeder’s music. A blues, the gritty “A Hawkeye, a Hoosier, & Two Cali Cats” is moderately up tempo. All the musicians solo on this toe-tapping performance. “Contemplation (Intro)” is its antithesis. The shortest selection (1:40) and classical in nature, this baritone saxophone-arco bass duet is played way down tempo, without improvisation. Though the two musicians interpret a score, inventiveness emerges from the appealing, mellow sounds the two deep instruments produce. This is, to me, the prettiest performance on Let’s Go. The title begs a question: If this brief number is the introduction to a larger piece titled “Contemplation,” what is the nature of the rest of it? Is it written for a quartet? An orchestra? Some other configuration? Does it allow for improvisation? If the remainder is as striking as the introduction, I hope Schroeder will record it.

In addition to his creations, Schroeder includes a tune by Stevie Wonder, two standards, and three jazz pieces. Wonder’s “You & I” is a pretty ballad. “Wrap Your Troubles in Deams” and Sam Coslow’s “In the Middle of a Kiss” are the two standards, though the latter is played so rarely that it hardly qualifies as such. I find Thad Jones’s “Let’s” the least rewarding of the compositions by jazz musicians. The other two constitute highlights. Recorded initially on Donald Byrd’s Blue Note album The Cat Walk (1961), with the composer on piano, Duke Pearson’s catchy “Hello Bright Sunflower” is somewhat reminiscent of “Lullaby of Broadway.” It deserves to be better known than it is. Schroeder’s version progresses in fits and starts and has solos by all the musicians. Jeff Hamilton’s brush work is especially impressive. As sprightly as “Hello Bright Sunflower,” Benny Carter’s “Southside Samba” primarily features Schroeder, though Wilson also solos. In performing these three tunes by jazz musicians, Schroeder demonstrates his familiarity with a wide range of jazz recordings and adeptness at identifying neglected ones.

Let’s seemingly offers something for everybody: brisk performances and slow ones, a short classical piece, original compositions, and works by others. Though the music is played in a familiar style, the selections are not well known, with the exceptions of “You & I” and “Wrap Your Troubles in Dreams.” In sum, this is impressive music by an instrumentalist still early in his career.