Music Charts Magazine® History – Song for the month of February 2015: The Turtles – “Happy Together”

The Turtles – “Happy Together“ 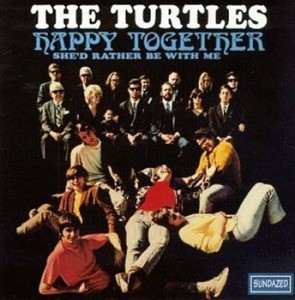 “Happy Together” is a 1967 song from The Turtles’ album of the same name. Released in February 1967, the song knocked The Beatles’ “Penny Lane” out of the number one slot for three weeks on the Billboard Hot 100. It was the group’s only chart-topper. “Happy Together” reached number 12 on the UK Singles Chart in April 1967. The song was written by Garry Bonner and Alan Gordon, former members of a band known as The Magicians. The song had been rejected a dozen times before it was offered to The Turtles, and the demo acetate was worn out.

In television, the song has been used in many episodes of The Simpsons including “The Way We Weren’t” and “Trilogy of Error”, and in episodes of The Brady Bunch Variety Hour, That ’70s Show (sung by the cast in the episode “That ’70s Musical”), The Muppet Show (sung by guest star Florence Henderson with a set of Muppet Monsters and Frackles), Cupid (sung by Lisa Loeb), Scrubs, ER, The Wonder Years, and the My Name Is Earl episode “Faked His Own Death”.

In advertisement, the song was used in 1980s Golden Grahams ads. In 1999, the song was used for a Super Smash Bros. ad where Mario, Donkey Kong, Pikachu, and Yoshi are fighting in a field of flowers. Toyota (Toyota New Zealand) used for its promotion of the Toyota Rav4 in 2006; the spot was made by New Zealand based Saatchi & Saatchi. In 2009, Ford used the song for the promotion of Ford Focus. The spot was made by Brazil based JWT São Paulo. However, the Ford commercial featured its “employees” singing the song while they designed and manufactured the car rather than the original version of the song recorded by The Turtles.

In sport, it is the official song of Melbourne City in Australia’s A-League.