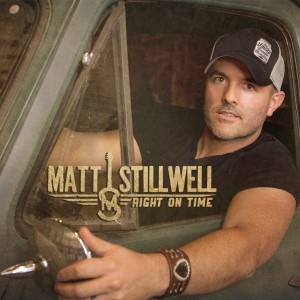 Just about every country music fan remembers Matt Stillwell for his hit single, “Shine”. But there is a lot more to this artist than one hit song. If you are one of the many fans who have lost touch with him over the past few years, it is definitely time to reconnect with this very talented vocalist and musician.
On March 11, he released his sophomore album, “Right On Time”. The album has 12 songs, five of which Matt co-wrote. Each song on the album is better than good, and several of them had me asking myself, ‘why haven’t I heard this on the radio?’
The title track, written by Matt Stillwell, Sherrie Austin and Will Rambeaux, is my favorite. “Right On Time” is a slow song, great melody, great lyrics, and basically great country music. Not the country/rock, country/pop or country/rap we’ve been hearing on the radio lately. This song will remind every country music fan why it is they fell in love with country music.
Matt’s new CD is definitely worthy of a raving review. I hope all of his fans who don’t have a copy yet will get over to iTunes and pick one up. When I first got this album, I found myself listening to “Right On Time” over and over. It wasn’t too long before I knew every word, and could sing with it from the first word to the last.
While that title track will probably remain my favorite, there are 11 more on this CD that are every bit as good.  I think “Enough” is another great song. And, I’m really sure most of our country music listeners will agree with me on this one. There is not one song on the CD that you will want to skip over when you see it coming up next on the play list. Here is what you are going to get on this awesome album: “Cold Beer” (Dean Dillon, Phil O’Donnell, Matt Stillwell), “Smoke ‘Em If You Got ‘Em” (Mickey Jack Cones, Matt Stillwell, Lynn Hutton), “Ignition” (Sherrie Austin, William Rambeaux, Paul Duncan), “I Do What I Do” (Wil Nance, Jim “Moose” Brown ), “Enough” (Justin Moore, Ashe Underwood, Jamie Paulin), “I’m A Sinner” (Lynn Hutton, Matt Stillwell), “The Way You Make Me Feel” (Michael Jackson), “Make Love For A Livin’” (Brad Crisler, Craig Wiseman, Gary Nichols), “Rough Draft” (Johnny Bulford, Phil Barton), “Sunshine” (Lynn Hutton, Rodney Clawson), “Remember Where You Come From” (Lynn Hutton, Matt Stillwell, Jon Henderson), and “Right On Time” (Matt Stillwell, Sherrie Austin, Will Rambeaux).
Matt is a great entertainer. I have seen him work with a full band, and also at several acoustic shows. His performances usually include his songs, as well as songs made famous by George Jones, Keith Whitley, Johnny Cash, Merle Haggard, and many others. He is putting the country back in country music, and I am sure I’m not the only one ready for that.
You can keep up with new about Matt, as well as his show schedule, at mattstillwell.com, and follow him on Twitter @mattstillwell. For all the latest country music news and reviews, visit countryschatter.com, and follow us on Twitter @countryschatter.​

Music Charts Magazine® Country music CD Review of Matt Stillwell - Right On Time - by Donna Rea /of the website we all know and love:  www.CountrysChatter.com